This is the first picture I ever took of Brinkley, on the day he came home with me.

Almost 2 years ago, my beloved (then) 6-year-old dog Brinkley got cancer. They found a mast cell tumor on his toe which then moved to his lymph node. After a toe amputation, an incredibly invasive surgery that removed the cancerous lymph node, and about 6 months of chemotherapy treatments his cancer was deemed “in remission.” Wee Connor was about 2 months old when we finally finished trucking our dog 30 minutes out to a suburb of Charlotte every other week, and I couldn’t believe he had beaten the year odds the vets had given him.

Life eventually returned back to normal, or as normal as life with a new baby in the house ever got, which of course isn’t really normal at all. The day-to-day became more and more of what we thought about, and in that we forgot to appreciate Brinks as much as we should. I got angry when he barked and woke Wee Connor up from his naps every time the buzzer in our apartment buzzed. I got angry when he growled at Connor when Connor stepped on his tail or did something inconspicuous. I got angry when he got into the trash. We didn’t take him for as many walks as we should have because, you guys, nap schedules are hard and so is taking care of children in general.

This past Sunday Brinkley got a bout of diarrhea that had some blood mixed into it. I called the emergency vet, and took him in, grumbling something inane about how “this would be a total waste of time and money,” and, “I’m sure he’s fine, but might as well be sure.” As the vet checked him out, I went into my spiel about his past history with cancer and the vet froze in her tracks. “What kind of cancer did he have?” she asked. “When was this again? And everything was fine again, you said? When you came in here a few months ago, he ended up being fine again, right?”

Time started slowing. My mind was racing. Had he been acting normally? He chased us around while I pushed Connor in his wagon this weekend, right? Definitely. He had given away my secret position to Connor while playing hide and seek this morning, the traitor that he is.

“…so the thing is that every single lymph node is swollen,” the vet said, as I popped back into awareness in this suddenly freezing cold room with the hard tile floors. I understood but wanted nothing more than to not understand what was coming next. “With his history,” she kept going, getting more uncomfortable, “this just…it’s just…my primary concern here is cancer.” They ran a full panel of blood work while I sat in the waiting room. The vet came back explaining the results of off-the-chart lymphocytes in his blood. “You need to get an appointment with oncology, and it has to be this week,” she told me. “Here’s the number for their direct line. Call at 8am tomorrow morning when they open to get an appointment.” She sighed and asked if I understood everything and finished with, “When I heard his symptoms, I never expected to be giving you this news. I am so sorry.”

We made the appointment and Friday was the earliest we could come in. I took Brinkley in Wednesday to the internal medicine specialist so he could order yet another panel of tests, aspirations, and give another opinion. Thursday the news came back with the results we had been dreading: lymphoma. It’s everywhere, and eating away at his bone marrow and seeping into his blood. The internal medicine vet urged me to keep the appointment with the oncologist so she could really point me in the direction of “options.”

Our options can only be described as grim.

With treatment, Brinkley’s prognosis is about a year. Treatment involves weekly visits to get chemotherapy for 8 weeks, then 16 weeks of going every other week, or about 6 months of treatment. To say this process isn’t cheap is kind of like saying Chicago has a wee bit of a history of crooked politicians. Luckily, dogs (typically) don’t experience the same side effects of chemotherapy as humans, so the year we have would actually be a good year together. Without treatment, he has one – maybe two – months left. This type of cancer has about a 100% relapse rate, so about a year is the best we can hope for before the cancer finally comes back and treatment is no longer effective.

For anyone who has been with us on this journey for a while, Brinkley is only 8 years old and now has had two separate and (they assured me) distinctly unrelated types of cancer. I was told statistically this is almost an impossibility. The fact that Brinkley has essentially won the cancer Powerball doesn’t make it better.

Chris and I talked it over the weekend and decided to go for the treatments. We simply aren’t ready to face Brinkley’s mortality, and knowing we can have a year with him that’s pain-free and happy, well, it’s worth the price we can pay for that.

Brinkley is a sweet, semi-neurotic soul, which makes it all the more difficult to stare down the year ahead because I, too, think of myself as a sweet, semi-neurotic soul. He embodies so many of my own qualities it’s sometimes hard to remember that he is actually a dog. After I started down the path of getting The News (capital ‘T’, capital ‘N’) I cried for about a week straight. After that was over I made up my mind to not only appreciate Brinks more, but to give him what I now call, “Brinkley’s Big Year” (which of course comes with the requisite hashtag #BrinkleysBigYear). 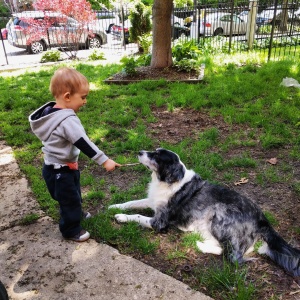 We will be doing all the things I want him to experience during this final year we have together. We will be grateful for his gentle soul and forgiving of his faults, even if one of those faults is digging through the trash can, which is, admittedly, still infuriating. We will take him to the dog beach. We will give him steak dinners. We will do everything we can think of to fill Brinkley’s bucket list because, frankly, he deserves it. Finally, we will document this year to show Connor that while he won’t remember Brinkley as he gets older, Connor’s name means “lover of hounds,” and Brinkley is, without a doubt, a hound worth loving.

I don’t know what kind of state I’ll find myself in at the end of this year, but I do hope that when I do have to say goodbye I’ll know Brinkley’s last memories are plentiful he’ll be happy enough to hold onto until we meet again. Until that moment, though, we have a Big Year (capital ‘B’, capital ‘Y’) to plan, a Chicago summer in which to have it, and have it we shall.