There comes a point when you arrive at a certain age and you actually start thinking this exact phrase:

I’m going to write a strongly-worded letter about this. 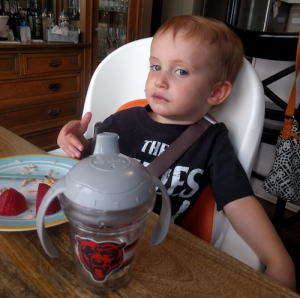 This is the exact face I make when I say I’m going to write a strongly-worded letter. I might expect one from Connor over this lunch any day now, apparently.

It’s happened to me for years, but there are certain strongly-worded letters I’d like to write as a mom that seem to trump over all other annoyances I’ve experienced lately. And so, having explained all this, I’d like to start a segment just for this on this blog. I’m creatively calling it, “Strongly-Worded Letters*.”

The first is one I know every mom with a mobile child has experienced because I can’t get into an elevator with another mom without discussing it: elevator button panels.

To whomever designed the layout of elevator buttons:

Thank you so much for putting the “call” and “emergency” buttons exactly at toddler level. There are special thank-yous in order to the ones who make those buttons red and extra-enticing. If handicapped individuals need to be able to reach the top buttons, can you not put those buttons at that level instead?

Do you realize how many elevator operator-people (no, I don’t know exactly who it is that answers those phones) I’ve talked to, apologizing? Or, rather, run out of the elevator from exactly as they pick up, embarrassed, knowing that what I’m doing is wrong? Or, even worse, realizing that half the time nobody is there because too many toddlers have pressed those buttons and now if there’s a real emergency we’re all SOL? Too many times is how many times. And yes, I watch my child and try and teach him correct behaviors, but sometimes I (god forbid!) have something in my hands, or am trying to find my keys, or any number of other things that may happen at any given moment when we are in the elevator. So thank you, elevator-button-designer-person.

P.S. Quick question: do the “close door” buttons actually do anything? Or are they simply a method of reminding us of our own futility in this world and that our place in the universe is quite small and fleeting? Because it sort of seems like the latter option.

*It’s this exact creative spirit that has me rolling in the beaucoup bucks** these days as a writer.

**You should probably know that I’m being sarcastic here. We still are too cheap to buy cable.