When Contours Baby* contacted me and asked if I would perhaps be willing to come downtown to witness and/or experience FCB Chicago’s latest brainchild for parents allowing them to test strollers in a real way, I was intrigued because how do we actually know if a stroller is comfortable or not? (Babies are notoriously tight-lipped when it comes to critiques of stroller ergonomics.) When I found out this would entail me hopping into – and being pushed in – an adult-sized exact replica of their flagship stroller I almost fell out of my chair in excitement.

Oh, who are we kidding? I absolutely, literally, fell out of my chair in excitement.

You see, after 19 months (whaaaat?!) of pushing another living being around in an ergonomically-designed wheeled contraption there was nothing – nothing – I wanted more than to experience this bliss myself. And wouldn’t you know? The name of the stroller model is literally Bliss. I’m talking fate, people. Kismet, if you will. 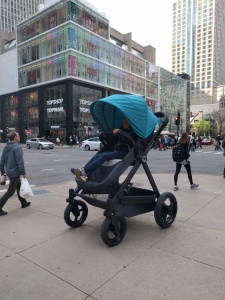 I know that’s exactly what they described, but I will still never be able to handle it.

The nice folks over at Contours had described the concept as a “full-scale, adult-sized, exact replica of the stroller,” and so I’m not sure why I was so shocked to see exactly that. Maybe I expected the general framework, but not all the details? But no. They spared no detail. The mesh undercarriage, the seat, the cute design on the inside of the sun shade, the mesh holders inside to hold toys (which I could only assume were to hold bottles of wine on the adult-sized one)? They were all there. Exactly to scale. Exactly as they appear on the baby-sized stroller.

The whole purpose of the day was for FCB to be able to film the stroller in action to get real reactions of people who are not used to riding around in adult-sized strollers (so their sample size was presumably pretty much any adult). They decided to film my piece down Michigan Avenue (the Magnificent Mile, for those not as familiar with Chicago, but who might have heard that term).

We planted ourselves right in front of the Water Tower, which is pretty much the epicenter of the most touristy part of the Mag Mile.

I strapped myself in with the 5-point harness because safety first, everyone… 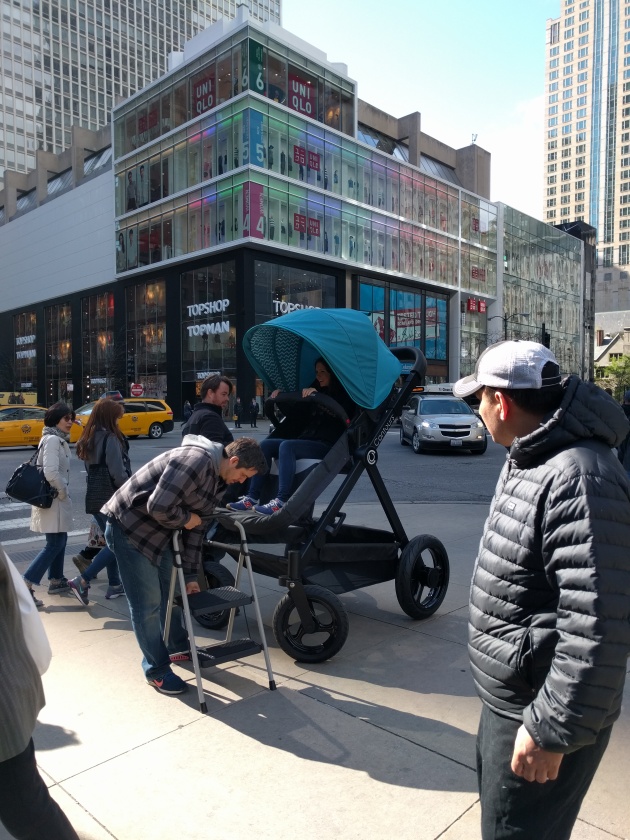 I addressed my legions of adoring fans…

And then we set off down Michigan Avenue…

…but then realized this was pretty much the best thing that had ever happened to me. Also, karma. Or something.

Yes, moms of the world, riding in a stroller really is as awesome as we have always wondered.

People (tourists and locals alike) could not stop taking pictures. If I’m going to become internet famous, this is absolutely how I’d prefer it to happen.

The verdict? The stroller was super comfortable, the ride, while beyond understandably slow, was steady and smooth, and I pretty much had the most fun I’ve ever had in my entire life on Michigan Avenue. Also, I got to ride in a freaking adult-sized stroller, and that is every mom’s secret dream.

Thanks for the good times, Contours! I had a blast. 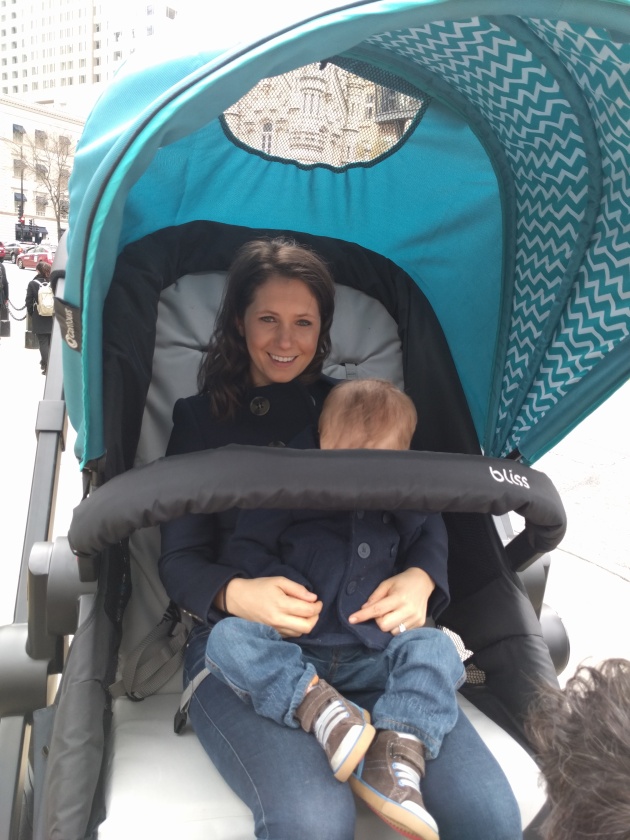 *P.S. Contours is having a $150 Spa Finder giveaway on their Facebook page right now through Friday, May 6th!

**FCB Chicago is an ad agency who partnered with Contours to enter into the Cannes Lions. An earlier version of this post stated the entry was solely by Contours.