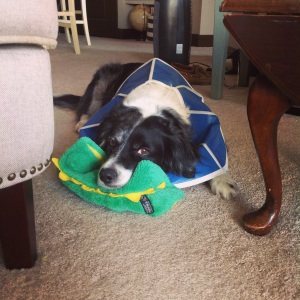 Chris has started calling him our “little sunflower.” Even sick, this dog is gosh darn adorable.

If you have read my posts before, you probably know one thing about me: I love my animals. I have a dog named Brinkley (who has a certain affinity for a certain giraffe baby toy) and a cat named Madison, whom my husband has re-named Miss Madison because she “should be fancy.” They are both rescue animals; I got Madison in July of 2007 and Brinkley in December of the same year – so I have had them for almost 7 years each.

We joke they are my fur babies, but really, truly, they are. The terminology that my husband used to shift my outlook on having kids was to start calling babies “human puppies.” It worked, obviously.

A lot of people have told me that having animals is “good practice” for when you have kids, but something always struck me a little odd about that. These animals are my kids. One time when we were moving someone asked me if I was going to take them with me and I indignantly asked them back, “I don’t know, did you take your children with you when you moved?” The rest of the encounter in line at the grocery store with that person was really awkward.

This is why my world shattered when we got the news last week that my dog, who is only about 7 years old, has cancer.

A few months ago we found a bump on Brinkley’s toe. We had it looked at by the vet, they aspirated it (which, to my understanding, means they stuck a needle in and tested some of the cells from it), and then told us that it was benign and nothing to worry about, but if it got bigger or anything that we should bring him in. Last week, we decided to bring him in again because we thought it was indeed getting bigger. They gave us the option to try and take the mass out, which I agreed to. Midway through surgery I got a call that the mass has grown very large and into the toe, and the only thing they could do was to take the entire toe. Luckily it was a non weight-bearing toe, so walking and recovery would actually be fairly straightforward.

After the surgery, the doctor called me again with the news. It turns out when they looked at the growth it was cancerous, and considering where it was they had to take a considerable margin out just to make sure they could get all of the cancerous cells out. However, they needed to send everything to the pathologist for a report in order to see what the chances of metastasis (spreading) were. Last night we got the news that while the surgery was successful and all margins were cleared (meaning they were able to get all the cancerous cells from the toe) the location and type of growth apparently has a high chance of metastasis, and our next steps will be to go to a veterinary oncologist for more tests and, probably, chemotherapy.

That’s where we are right now.

And clearly, because life works that way, to make the timing extra special I’m leaving for Europe for a week starting Saturday, which means that the initial oncology appointment will need to be handled by Chris. I already despise and distrust this new vet based on the fact that when I asked to be put on a waiting list for cancellations for today and tomorrow (the last two days I am here) they replied with, “Just so you know, it’s really not likely at all” while LAUGHING. THEY LAUGHED. THEY ACTUALLY LAUGHED AT ME WHILE I WAS SCHEDULING MY DOG FOR CHEMOTHERAPY. So leaving this appointment in the hands of anyone else makes me want to throw a brick. Seriously, though, they laughed. How could a vet’s office specializing in oncology actually have the nerve to laugh at their new patients? I held it together to not blow my lid at her for fear of having “crazy bitch mom” scribbled at the top of Brinkley’s chart forever, considering they are the only veterinary oncology game in town. But it was a really close call.

It’s possible Brinkley could start treatments as soon as next week, which means that not only will I not be there to give Brinkley a million extra kisses and hugs and cuddles, but I won’t be there to talk to the vet and ask all my million neurotic questions. While I of course trust Chris to sustain lifeforms in my absence (that’s the point of choosing someone to procreate with, right?), it still hurts my soul that I won’t be there myself. What if Chris only asks 999,999 neurotic questions and not the millionth? What’s the point of having quit my job if I can’t be the one to do this sort of stuff? What if Chris decides he has to hurry back to work and then only asks 500,000 neurotic questions? Will he remember to call back with the remaining 500,000? The potential for a worry spiral is endless.

I know I’m describing the sensation of being a mom all the time, or at least when something happens, but my point still stands. I love this damn dog to the end of time, and will do anything for him, just how I know I’ll feel if something happens to Wee Connor after his arrival.

I mean, COME ON. This is just too freaking cute.

Pets aren’t practice for kids. They are kids. If you do happen to have room in your thoughts or prayers for us, we would appreciate it. We know that Brinkley will be fine, but figuring out how that fine is going to be achieved is what we’re up against now. We shall prevail!

One thought on “Animals aren’t just practice for having kids, they ARE kids.”