I don’t want to be back.

You have GOT to be kidding me.

Especially when the weather forecast looks like this in Charlotte.

We took a redeye over Friday night, arrived Saturday morning, and didn’t stop walking as soon as our little feet hit the ground in London. We averaged over 10 miles a day walking and I never wanted to stop, despite sore feet. Seeing TLH’s parents was an extra special treat since they live over in London 60% of their time, and we made a firm commitment to come over as much as humanly possible from now on.

Side note: I will never, ever, EVER stand down from this: walking everywhere (or as close to everywhere you can) is life-changing. Walking is good for the heart, the soul, and the mind. You see things you would never get to otherwise if you’re passing by in the speed and isolation of a car. When you are in a place with life on the streets, the streets are alive in a way that bring life and heart to a place that cannot be replicated by a destination you can arrive at only by car. I am not talking about “taking a walk/hike” in a park/mountains, etc. I am talking about walking as a lifestyle. I am talking about walking out of your house/apartment/dwelling abode and being able to get to places on foot while having other places to visit in between. (I recently finished a book about this phenomenon – called walkability for those who aren’t urban planning nerds – and will probably write more in depth about this later because it is something so near and dear to my heart.)

Anyhow. Ahem. Back to the trip.

We tried to do a range of tourist sights and explore more non-touristy neighborhoods, since places crawling with tourists tend to make my head explode after a while.

And apparently, while I wasn’t looking, my “bump” decided to become a real life bump.

Also, refreshing: in the UK people don’t assume you’re fat. People instead actually comment on your baby bump and wish you congratulations instead of assuming that you’re generally fat or bloated. It was awesome.

We did some main sites like St. Paul’s, Westminster, Tower Bridge, walking around Buckingham Palace…and I think London quite agrees with me. 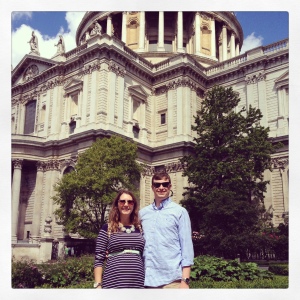 St. Paul’s Cathedral – seriously, where did that bump come from? 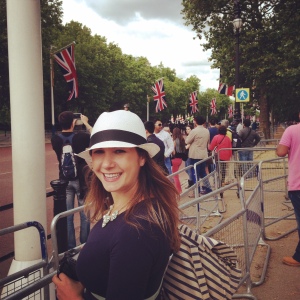 Buckingham Palace. We happened to pass by right as the changing of the horse guard was taking place, which apparently is miraculous timing.

Tower Bridge. In case you were confused.

We also explored some other neighborhoods, notably Shoreditch and Spitalfields, where we got to see some amazing outdoor markets, including the flower market.

The flower market on Columbia Road in Shoreditch.

Another market in East End. Can’t get enough.

We also made our way up the coast on a train to Edinburgh. While the weather was decidedly Scotland, I have decided that Edinburgh might be one of my most happy places on earth. The city is “best seen on foot” as said by every local we ran into, yet it was decidedly manageable. Also a plus? The tourists seem more “contained” to one area, which means that it would be extraordinarily liveable. I want to move there tomorrow. TOMORROW, I SAY. Though, of course, I say that about almost every large city I visit and would move to London tomorrow, too.

The other plus of Scotland? Finding the adjective “wee” the most precious thing I have ever heard (as the Scots say that for EVERYTHING), we have started referring to the Woodlet as “Wee Connor”, which is a step in the right direction to admitting that there is a human being arriving in October.

TLH tried and, to everyone’s shock, loved haggis, which is clearly disgusting. He also bought a tweed jacket, so as I figure it, we’re halfway to being locals.

Seriously, c’mon Edinburgh. Share the awesomeness around. You have too much.

See the smile? IT CONTINUED AS HE ATE THE HAGGIS.

Protip: get maternity outerwear. Otherwise be prepared for awkward cutting-off points in your clothes when your bump develops. This PSA brought to you by this picture.

Overall? A+ trip. I can’t wait to go back, which says a lot as my travel inclinations are to go to places that I have never been. The next time I’d love to do more of the countryside and maybe spend more time in Scotland.

Til next time, Europe! Which will be in August, when I’ll be extremely large and in charge but hopefully Luxembourg and Belgium will be willing to feed me plenty of chocolate, waffles and French fries.

P.S. I took this picture of this dog at a pub we stopped in in East End. It is worth noting that I have never seen a real-life incarnation of Yoda before, and it is something that will haunt my dreams forever. I love him. 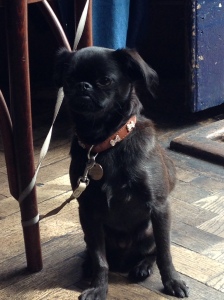